The CEC works to establish trusted and respectful relationships with patients, carers, and families, through the Partnering with people program. The aim is to enable people to feel safe, empower their voice and support a sense of agency.

Sepsis is a life-threatening condition which arises when the body's response to an infection damages its own tissues and organs. It may lead to shock, organ failure, and then death. It must be recognised early and treated promptly to avoid death and lifelong health issues.

Sepsis is the final common pathway to death from most infectious diseases worldwide, including viral infections such as COVID-19.

This video provides information about sepsis, its signs and symptoms and potential health problems after sepsis. By raising awareness among the general public, health consumers can be empowered to speak up to clinicians about sepsis.

It is estimated that at least 55,000 people in Australia develop sepsis and 8,000 of them die each year. Sepsis is treatable if detected early, so it is important to know the signs of sepsis and when to seek urgent medical care.

Remember to ask your health provider, "Could it be sepsis?"

Aboriginal and Torres Strait Islander peoples have a higher risk of getting sepsis. This video provides key information about sepsis, its signs and symptoms and simple ways to reduce the risk of you or a member of your mob falling ill with sepsis.

Sepsis can affect people of all ages, from the very young to the old. The Australian Sepsis Network (ASN) has gathered many of their stories and some examples are provided below. 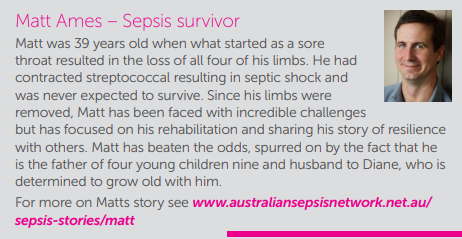 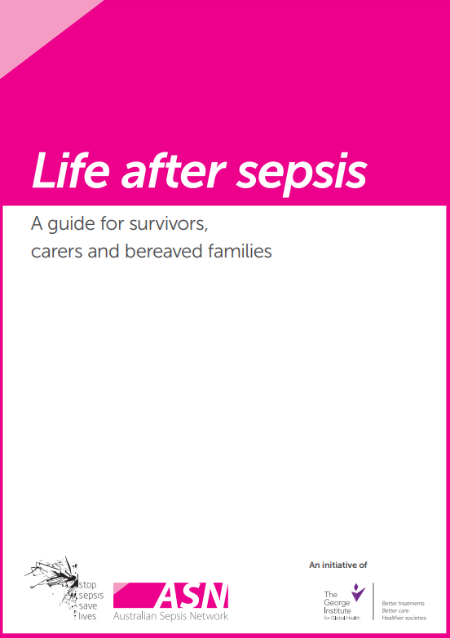 While recovering from sepsis, some survivors encounter a range of medical, psychological, and emotional issues. Post Sepsis Syndrome (PSS) is the collection of physical problems that affect up to half of all people who survive sepsis and can include any one or more of the following:

The syndrome normally lasts between 6 and 18 months but can sometimes last longer.

The ASN Life After Sepsis guide provides information and support to sepsis survivors, their friends, family, and carers, as well as bereaved families, as they navigate the very difficult post-sepsis phase.

There are a number of active consumer advocacy groups that can be contacted for advice and peer support based on lived experience. They also have other resources on their webpages which you may find helpful: